It must have been a nice autumn of 2006 as I had the tarp and boards completed by December 10th.  I switched it around this year by putting the tarp down first and then placing the boards on top of the tarp then securing the tarp behind the boards.  Everything up and ready on December 10th - we didn't get a major snowfall until December 25th.  Well, at least we had a "White Christmas".  I packed the snow on Boxing Day - obviously in between games of the World Junior Hockey Championship (simply my single favourite sports event of all time).  I followed that up with 5 straight days of flooding to just get slapped in the face by over a week of temperatures that hit as high as +8'C but averaged around +5'C.  By this time, any snow base that I had inside my tarp was long gone - and yes, I had holes in the tarp.  I tried running the hose in a couple of areas to try and build up some areas but was rewarded with snow (10cm) on January 15th.  On January 16th, the temperature hit a low of -22'C with a wind chill of -34'C.  One of my friends came over before hockey and as he flooded with the Rink-Rake, I was taking water-soaked snow and patching holes in the ice.  We took a break for hockey and I came back and flooded from 12:30AM until 3AM.  I continued the flooding routine when I could and we were skating in 3 days - first official skate of the season was January 20th.

My nephew, 10 years old now, had started playing some competitive hockey - now he was starting to appreciate having a backyard rink a couple of doors down and even started inviting some friends over to shoot the puck around and play a little hockey.  Something else occurred during this season that has forever changed the face of my backyard rink - a buddy of mine (who I ran a pick-up hockey session with in the city) purchased some 2nd hand goalie equipment to have for one of his other leagues, so I asked to borrow it.  The result: 9 guys playing a 4-team 2-on-2 tournament on Super Bowl Sunday with me volunteering to be the goalie (first time I ever put the stuff on in my life).  Here's the proof: 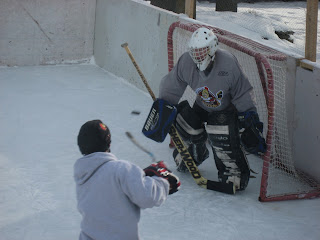 Squaring for the shooter: 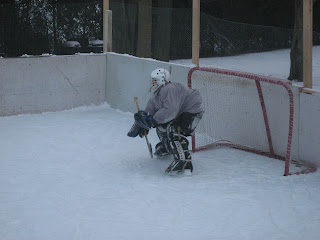 A week later, we all got together with 2 actual goalies and played a 5-team 2-on-2 tournament.  You score - you stay on; you get scored on - you leave.  On February 16, 2007, I did something that I have never regretted; I bought a full set of goalie equipment from a buddy's friend.  It wasn't in the best shape, but I owned goalie equipment.  I owned goalie equipment!!  It was barely out of the car before it was donned and we were taking shots on the rink.  We ended up playing hockey on the backyard rink on both Saturday and Sunday that week.  It was awesome.  The next weekend, we had 6 skaters and 2 goalies.
We hit another warm spell at the end of February - most people would have packed it in, but not this guy.  I'm stubborn - just ask my wife.  With a little persistence, I kept the rink alive for another 10 days.  We even managed to play hockey one more time on a Friday evening (March 9) - 6 skaters and 1 goalie.  My girls and I took in the very last skate of the season on the following morning.  The rink was only up for about 6-7 weeks this season but it was the 'most-used' of all the seasons so far. 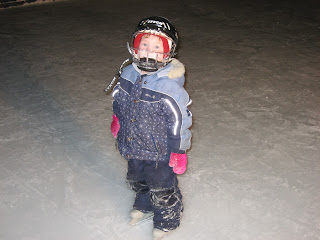 This will go on the back of her first hockey card: 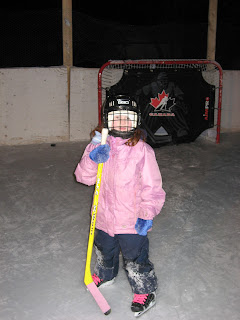 Some additional rink journal posts from this season that caught my eye:
February 3 - Katie and I shovelled and flooded the rink.  (She was 4 and I remember this like yesterday as she kept moving the hose to keep it out of the way)
March 8 - Skated with the girls - Katie has improved immensely. Girls shot the puck around.

This was also the year that I started 'flooding' the front lawn.  You see, my wife and I (more her than me as I was busy with the rink) always piled the snow from the driveway in one spot so that the girls and their friends would have a place to slide.  Well this year, I took it one step further - I was outside with a hose in my hand anyway:


I guess if they don't make Team Canada on the Women's Hockey team, they still have a chance in the Luge or Skeleton.  All in all, even though it was a short winter, it was a great winter!
Posted by kevmac at 11:14 PM