It's been so long since I started making these rinks that I keep mixing up the years.  I can't remember what I bought when but I believe that this season was done the same as the year before except I believe I used a sheet of plywood to pack the snow.  It wasn't a big piece, easy enough to move around, yet big enough that when I jumped on it it would pack the snow.  What a picture I must have been that year - carrying a piece of wood around my backyard and jumping up and down on it.  You know what though - it worked!

I may have failed to mention this in the last post, but in the spring of 2002, my wife gave birth to our second child.  And yes, it was another girl.  I heard a lot of jokes like how I was forming the starting lineup for Team Canada in the 2022 Winter Olympics.  At this point, I would like to mention how incredible a wife I have.  Dealing with 2 young kids under three and your husband has lost his mind staying up until 2 or 3 in the morning with a hose in his hand trying to make ice.  I married a very special person.

Back to the rink, I have some notes from that season and I know that the snow was packed on January 1st - followed by a cold snap about a week later.  I started watering the rink on January 7th and didn't skate on it until January 18th.  The first thing I did after skating was measure it - it was 36.5' wide and 68.5' long.  I bought a net that year - supposedly puck resistant - and we lost a lot in the snow.  I even attempted to make lines with some sidewalk chalk.  Note: sidewalk chalk is not the best way of making lines. 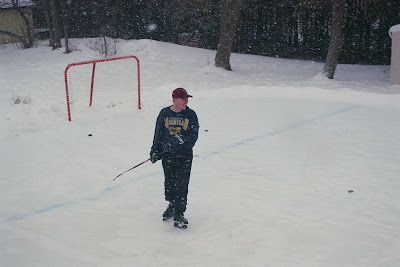 However, the best moment of this season was when my oldest daughter (2.5yo) 'skated' for the very first time.  Sure they were only bob-skates belted to the bottom of her boots, but there she was skating on my backyard rink. 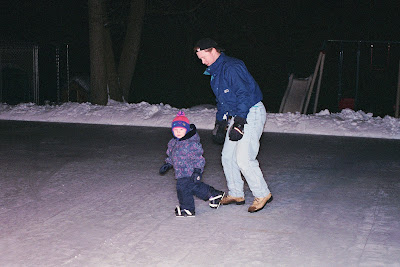