After completing your third year of backyard rinking, you should have some sort of a system and all the tools you think you should need.  Non-kinking hose? Check. Portable Hose Reel? Check. Quick-connect hose connectors? Check. Rink-Rake (or something similar)? Check. Nets? Check! Couple of pails of pucks? Check. Boards? Che..  wait, what?! Boards? No, I don't have boards and this is where my rink takes a huge turn in it's 'evolution'.

Late fall, it could have been on Thanksgiving Weekend (that's in October for us here in Canada) or it could have been during some NFL Sunday - doesn't matter, my brother-in-law suggests something that peeks my interest.  Both him and his wife work together in the grocery retail business and he tells me that one of their delivery guys sells pallets.  Yes pallets - not palettes.

In the mean time, I waited for the pallet guy to get enough pallets to complete my order.  He wasn't able to deliver it until just before Christmas - I'll ballpark it at December 18th or 19th.  The cube van backed up to my house and next thing I knew I had 50+ pallets - smelling like rotten fruits and vegetables - sitting in my garage.  That night, I began the task of cutting through the majority of them with my Skil-saw; this is the point where I do not recommend any of the above.  Get a chainsaw to cut pallets or get a friend with a chainsaw if you have a wife like mine who apparently loves her husband enough to not allow him to use one.  Over the course of the next few days and no major injuries, I had successfully sawed half the pallets in half. I was lucky enough at the time that my job shut down for nearly 2 weeks during Christmas and I always tacked on a week's holiday as well; I had the time to spare.

By December 22nd, the boards were starting to take shape.  The pallets that were left intact would form the endboards and the corners, while the halves would run the length.  This is what it looked like on December 22nd: 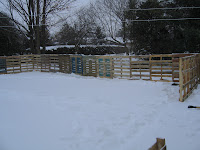 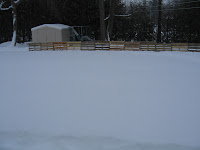 I, unfortunately, already missed the first couple of snowfalls so the tarp would have to lay on top of packed snow this year.  I wasn't in a position to order a truckload of water to fill the tarp and there was no way that I was running my well and all my neighbours' wells dry either so I had to wait until snow fell again.  Snow did not arrive again until January 6th - I spent the next several days packing and watering the rink with my trusty lawn roller and handy rink-rake, respectively.  That year, just when things were looking like they were taking shape, Mother Nature struck with some freezing rain (which actually helped on the ice making front) followed by rain (which didn't help on the ice making front, but did help fill the tarp.)  The rain was followed by 2 days of frigid weather where I flooded until 3:30AM and 2:30AM.  The next night (Jan 16) I skated on the rink for the first time.  Temperatures hit -22'C (-32' with the wind chill) and -21'C for the next two nights and then there were 4 nights where it was too cold to even flood. (I know some of the info because I started keeping a 'rink journal' - yeah, it's a sickness, I know.)

Another first year was the addition of some kind of netting to hold the pucks in the rink when we were playing hockey.  My best friend asks me, "What are you going to use?" and my quick response (apparently like the true redneck I am) was, "Chicken wire I figure."  This line is still brought up every year while skating on the rink or in a hockey dressing room whenever the two of us are together.  Both the girls skated a lot on the rink this year - sure enough I was going to raise them to be female hockey players since it was apparent that I was never going to get 'my boy'.  All in all, it was a great year for the rink as we used it a lot and we were able to use it well into the middle of March.

Here's a couple of shots of the final product that season: 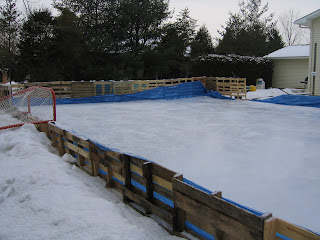 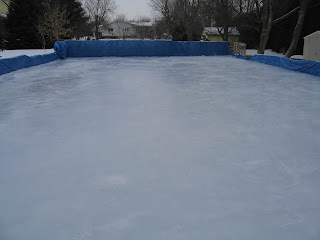 They may not be the prettiest boards out there but for those keeping track, the checklist now looks like this:
Non-kinking hose? Check. Portable Hose Reel? Check. Quick-connect hose connectors? Check. Rink-Rake (or something similar)? Check. Nets? Check! Couple of pails of pucks? Check. Boards? Check.
Posted by kevmac at 9:46 PM